ALRIGHT, EVERYONE. I wanted to make a post about my top 10 favorite vegan restaurants in Los Angeles. I know that there are SO MANY to choose from, but I wanted to share my go-to spots! Plus, times are tough right now. Let’s show my favorite spots some love!

Ramen Hood is, you guessed it, Ramen! The reason why I pick this specific spot over others is that there’s a vegan egg option. Yes, to put on top of your ramen. That’s something I have yet to encounter in any other vegan restaurants. It makes me happy to have an all-vegan ramen place rather than one that just offers vegan options. The veggies are fresh and the sunflower seed broth is innovative. 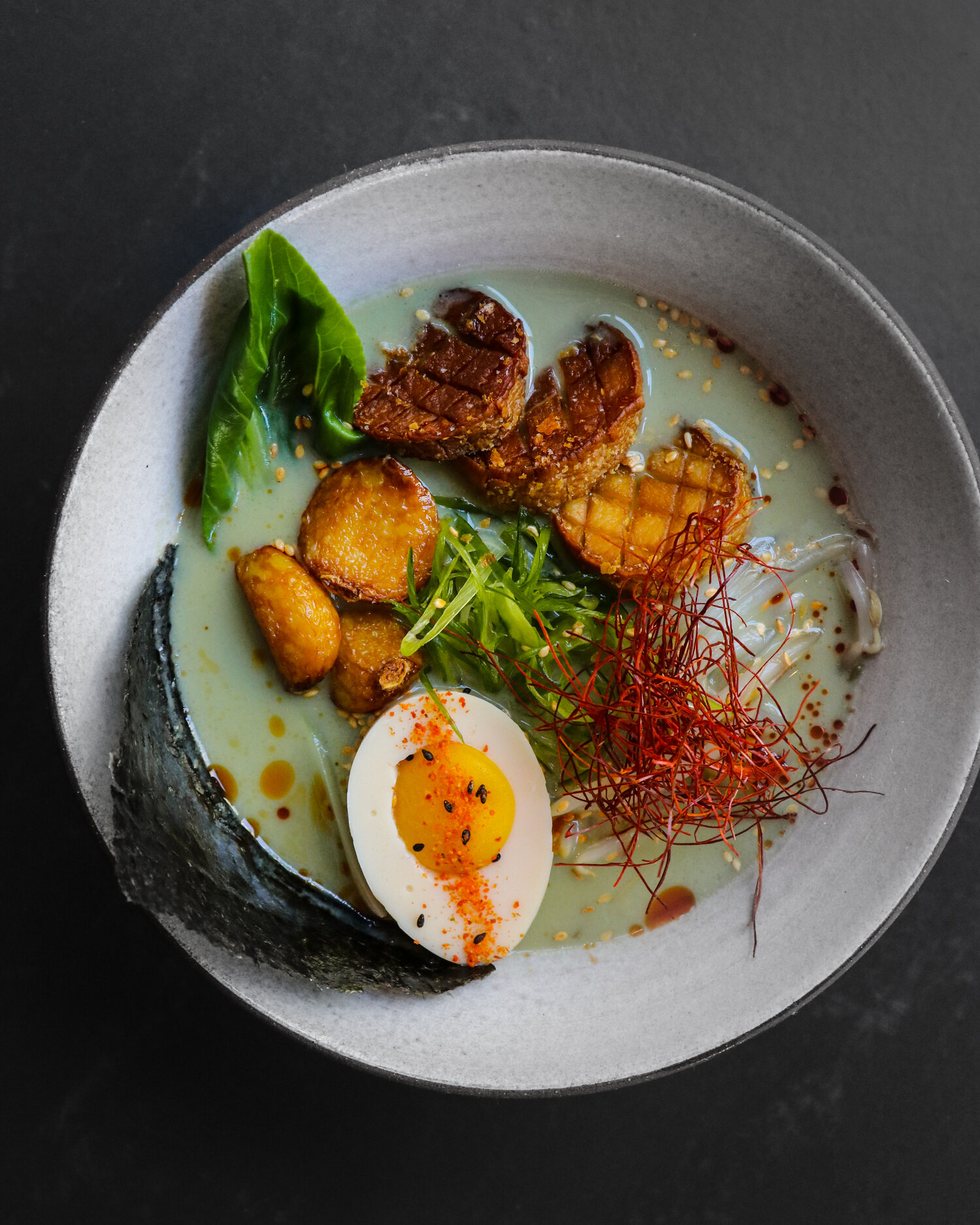 What can I say? Asian food is my favorite, and My Vegan Gold fits the orange chicken and dumpling shaped holes in my heart. The Thai beef jerky was an appetizer we just randomly picked and immediately LOVED. Their curries and noodles are delicious too. I stick to the Asian inspired dishes at this spot because they never fail to satisfy. The customer service is great and I would recommend this place to anyone. 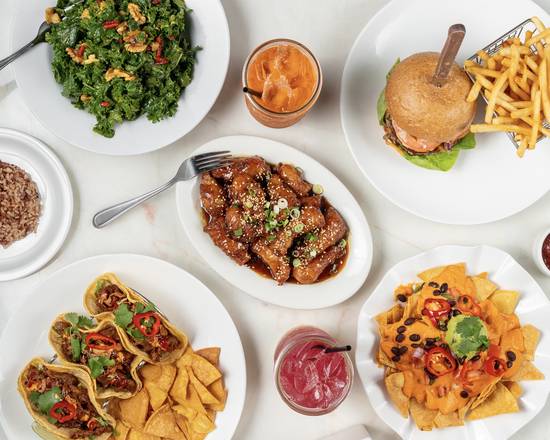 A super trendy spot, Gracias Madre is another amazing Los Angeles vegan restaurant. It’s decorated so nicely and has a huge patio space. I don’t drink, but I know that everyone loves their cocktails (the list is HUGE). I’m a huge fan of the bowls. You get a little bit of everything. Every vegetable I’ve eaten here has been so flavorful and fresh. It’s a place appropriate to celebrate special moments in life. 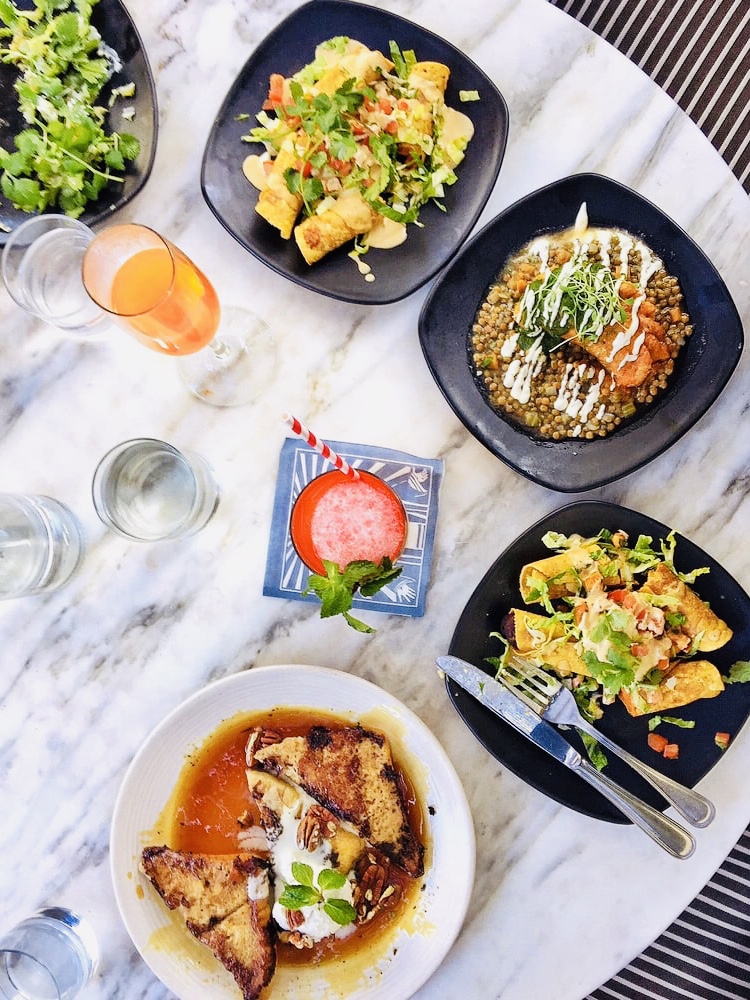 A neighborhood favorite, Lotus Vegan earns a spot on my list. I’m a sucker for Thai food and Lotus Vegan does it right. Although, one of my favorite appetizers are the buffalo wings. They make a great Pad See Ew and red curry. My ultimate favorite menu item is the mango sticky rice. I ate it SO much in Thailand and I feel like I can never eat enough of it. They use black rice and it comes in the shape of a little bear. The cutest little thing! We stumbled across HOPE by accident and now it’s become one of our favorites. I’m obsessed with their curry dumplings and freshy rolls. The dumplings are perfectly cooked and come in a bowl of their delicious red curry. We also love their Pad Thai with tofu. The banana spring rolls for dessert complete a delicious meal every time. Everybody loves Crossroads Kitchen. I mean, Katy Perry said it on a commercial. Although the portions are small, the flavor makes up for it. Plus, when dishes are small, you are almost forced to order a bunch of different things just to try them! One of the most delicious things I’ve ever eaten was the fettuccine and truffles. I don’t even like mushrooms, but that dish was requisite. We reminisce about it frequently. Their impossible cigars are a fan favorite. I love their vegetable dishes. They sound so simple, but they’re always prepared perfectly and in unique ways. I’ve had potato, carrot, and radish dishes from the vegetable menu that were exceptional.

There’s not much that comes close to Cena Vegan. What started as a little pop-up, is now a full-blown brand. Cena Vegan is so special because they make all their plant-based proteins in-house. Now you can buy those proteins and have them shipped to your door. I always get the taco trio so that I can get three different proteins. Their guac is amazing too. The burritos are hefty and amazing. Everything about this business is great. “Healthy, delicious, and affordable.” Go get yourself some authentic vegan Mexican food, you’ll thank me later.

Okay, okay, it’s not *technically* a restaurant, but Donut Friend is still an all-vegan food spot! I had an unhealthy attachment to my favorite vegan doughnut shop in Brooklyn before I moved to the west coast. Donut Friend has filled that void. They’ve also surpassed it. Donut Friend is my absolute favorite doughnut shop. The doughnut that has a stranglehold on my heart is called X-Ray Speculoos. It’s a donut filled with cookie butter. If I don’t stop getting this doughnut, I will become diabetic I’m sure. Anyways, not only do they have amazing doughnuts, they’ve got great coffee and awesome merch (since all their doughnuts are named after bands!) It’s totally up my alley as an angsty punk rock/hardcore kid in the early 2000s.

Okay, I’m German, and other than weiners and hot dogs, I had no idea what German cuisine entailed. Hinterhof brought that into my life. Not only have I grown to love a new cuisine, but I also feel somehow that I am not disappointing my German family by being vegan when I’m here. Lunch and dinner menus are great, but their brunch menu blows everything else out of the water. The pretzel bread french toast is one of the greatest things I have ever eaten. The bread is light and airy. It’s topped with powdered sugar and tart cherries. You don’t need syrup. A few other menu favorites are The German Farmer’s Breakfast and the Schnitzel and Waffles. They provide incredible customer service and I love sitting on the patio with my dachshund, Dexter. Honestly, if I could eat one thing for the rest of my life, it would be a double cheeseburger from Monty’s Good Burger. Some vegan burgers fall apart, some are too thin, and some are just tasteless. Monty’s is none of those things. I have never had a better burger in my life. My non-vegan boyfriend also LOVES Monty’s. They use impossible patties, Follow Your Heart cheese, house-made sauce, and the freshest veggies and buns. I know some of you may not like that they use big-brand products, but trust me. When you eat one of their burgers, you’ll know they’re delicious because they know HOW to prepare these ingredients. Their milkshakes are incredible. There’s a rotating flavor every month. Monty’s is also a big advocate for animal rescues, and that is just the cherry on top of all of this. MONTY’S FOREVER. credit: I actually ate these so they’re mine.

The only reason I don’t have Magpies on the list is that they are not fully vegan. They do offer dairy ice cream alongside their vegan options. This is one of the best dessert spots I’ve ever had in my entire life. Yes, there is vegan soft serve ice cream and pints. But the real winner here is the ice cream pies. Yes, ice cream pies. The fried pie is one of the most unique and delicious things my body has ever digested. It’s corn almond soft serve with fudge, honeycomb, whipped cream, and topped with candied cornflake. Unbelievable. One time we purchased two whole pies for a 4-day trip. Not my idea, but I definitely didn’t fight it.